This Just In
45 products Feminine and strong, the Corset Bra features a flattering square neckline that is equal parts stunning and supportive. The faux boning in the front mimics the look of a corset while the criss cross back completes your modern renaissance look. Prepare to freely stretch, flow, and sweat with every move.

Still loving the corset bra line, very elegant and the pop of color in the back is my favorite feature. I think it fits exactly the same as the Crimson one I have. The band is pretty narrow but not a problem for my small chest. The material is nice but very thin so the removable bra pads are quite visible. 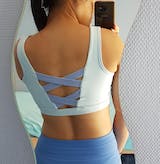 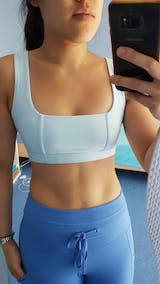 This is one of my favorites. It’s also one of the smallest sports bras ever. Fits great! I was worried it would ride up while inverted and show under boob, but it stays put. I’m smaller chested, it’s very flattering. I could see how someone with a larger chest may not feel as secure, but the seam around the waist does a great job without squeezing me too much! 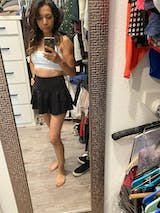 What a great, flattering fit! We love that you love this bra!

Sigh. I really wanted to like this bra. When it first came out last year in the sugarplum collection and was selling out, I really didn't understand the hype.
And after ordering one and trying it on, I still really don't understand the hype (even more, if that is possible).
There are some beautiful, elegant features to this bra: the colours, the straps, the back criss-cross pattern. The front, however, is extremely problematic. Other reviewers have said this already, so it may sound redundant, but I do concur: there is just not enough fabric in the front. I don't mean in terms of modesty, I mean in terms of FUNCTIONALITY. Even if it were just an INCH higher in the front, while it would still be too low, it would make a huge difference in terms of holding the boobs in place the way a bra actually should. Even with the cups taken out (which I do with most of my bras anyway), this issue was not resolved. You'd think that wearing a shirt over top would help, but nope! It really doesn't conceal anything. All it shows is how much is spilling out at the top and barely contained. Gives the area a weird effect, like they're bubbling out over the small bit that is in the bra (trust me, it's not flattering). In fact, the back is actually higher than the front, which you can see in the attached pictures. This should be enough of a warning that the front will fit way off. (It should be higher in the front.) And just to be clear (and this is the kicker): I don't even have a large bust! Nearly every single one of my other bras from popflex is a small. All my Gulch bras - which fit beautifully and which I wear all the time - are smalls, and I love them! But not with this one. Sizing up is always an option, but I doubt it would solve the issue of the front's low cut design.
Bottom line is: **This bra would fit perfectly if it were just a few inches higher in the front.** It fits perfectly everywhere else.
Another reason why sizing up likely wouldn't have solved the issue: the band and straps would have been too loose. They fit perfectly now. This whole bra would and should fit perfectly, but, again, way too low in the front for functionality. Popflex, please change these bras so they are not so low cut in the front. I will gladly buy one then.
I can hardly feel comfortable wearing this bra under my clothes and doing every day tasks, let alone wearing it on it's own and working out in it. That's how bad it is. I realize that this is not an issue for all who have purchased it, but unless you are one of the few that this somehow fits, I cannot and would not recommended this bra to anyone based on my experience with it. A hard no for me.

My personal definition of a sports bra is one that provides support during activities such as running and jumping. I initially bought a M (first 2 pics) based on the size guide, but it didn’t give as much support as I’d hope. Looks great and feels fantastic, though!

I was able to return for a size S, and this gives the compression/support I’ve grown to expect! It doesn’t give as much coverage, however. Also, the padding has a tendency to move off center (but what sports bras don’t??).

Love the look, love the feel! If you’re not intending on high-impact sports, this will work just fine if you follow the size guide! 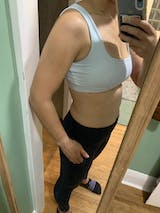 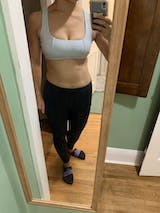 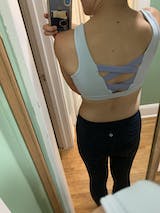 I was initially worried about how it looked for support when it came out in crimson, but after buying ice, i’ve found it really holds me in! It’s super comfortable, super supportive, has nice, thicker cups that move around less, and I LOVE the corset style of course. It worked beautifully for a cinderella-esque outfit as well. Can’t wait for even more colors <3 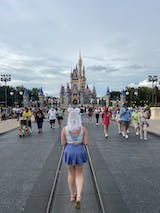