This Just In
31 products
Clothing Meet the Energy Shortsie. Featuring a daring low back, ergonomic underbust detail, mesh waist panels to accentuate your hourglass, and anti-cameltoe construction, this unique design is function and fashion all in one easy-to-wear piece. Perfect for Pilates, Barre, running errands, and other low-impact activities. This cream onesie is double layered in the bust and bottom to prevent sheerness.

Was so excited about this onesie! I’m a consistent 6 in tops and bottoms so I ordered a medium per my measurements and the size chart. The bottoms cut into my thighs to the point it was uncomfortable and unflattering. The top was way too big to provide any support (definitely not something I could even think of exercising in). The low back (while super cute) makes the straps fall to the side and gap, if they were adjustable it would make a huge difference!
With some design improvements, this could be so cute! Sadly will be returning.

I absolutely love the style of this and the black one, but unfortunately the cut of this just didn't work for me. I'm a 34G/H and have to size up to a 1X in Popflex's sprts bras even though I'm a large/XL in other brands. I decided to try the XL in this though, since I'm smaller than the model who wears a a 1X in this. I was worried that the top might be too small, so I was surprised when it was actually too loose. The straps were too long for me and also too wide set, causing them to nearly slide off my shoulders when I was basically just standing still to try it on. The bust in general offered me zero support and just sat all kinds of weird on me. I bought this to work out in, but it wouldn't have even worked as loungewear or for a low impact workout. It fir perfectly in the waist and legs though. Maybe it's just because I'm an odd size up top (large cups and small rib cage), but I'm really disappointed. It's super cute though, so I hope it works for people with a different body type than mine.

I think I’m a bit of an awkward size, because I’m fairly small, but I’m not confident about my abdominal area after having my kids. However this onesie is amazing. The fabric feel good on my skin, but is also so forgiving. I love the way I look in this outfit. I feel beautiful, sexy, strong and oh so confident in this outfit. I bet a lot of women of different sizes are gonna feel the same. 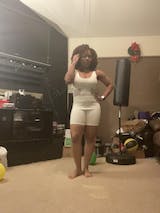 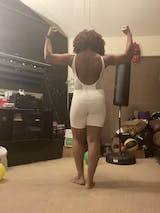 Honestly, I’m not a huge fan of the front design but am loving the deep cut in the back. It gives that sexy look.

The chest area hugs the girls quite a bit, but not in an uncomfortable way. It’s just because of the wide neckline.

The other thing I have going on with it is that the nipples can be a bit noticeable. 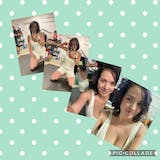 S
Sofia
Great idea but everyone can see the cups

I love it however the cups are very visible in the white so I don’t feel like I can wear it without something on too to cover that.